When a bionics specialist named Leif Kniese was fishing in Norway, he noticed that the fins of bony fish have interesting mechanical properties. When he pushed his finger against the tail fin of the fish he caught, it did not bend away. In fact, the opposite happened; the tail fin bent in the direction of his finger. Upon further examination, he discovered that the reason for this was the structure of the tail fin. The bones of the fin consisted of two cartilaginous longitudinal rays. These longitudinal rays are connected by elastic tissue, which is why they move towards each other in the event of a load. The technical implementation of this structure resulted in the development of the Fin Ray Effect. The basic element is an acute triangle constructed with flexible sides. The two sides are connected using braces or ribs.

The Fin Ray Effect is an example of the bottom-up biomimicry design process, where scientists study a natural phenomenon and then apply it to solve a technical problem.

Watch the video to learn more. When you are finished, click on the pdfs for a Fin Ray craft sheet template. Once you create your Fin Ray, take time to examine how this technical solution can help you with your bionic robot.

External Anatomy of a Bony Fish

With more than 15,000 species, the bony fish are the largest group of fish. The bony fish have a bony skeleton, like the name suggests. Each of the fins on a bony fish have a specific purpose. The caudal (tail) fin [1] helps with steering and controls the speed of forward movement. On a bony fish, the upper and lower lobes of the caudal fin are symmetrical. The anal fin [2] helps the fish with stability, making sure the fish doesn’t roll from side to side. The pair of pelvic fins [3] assist with balance and steering. They also act as brakes to slow the fish down. The fish uses its pectoral fins [4] individually to turn in either direction or control up and down movement. The dorsal fin [5] acts like a keel on a boat and helps keep the fish upright and stable. 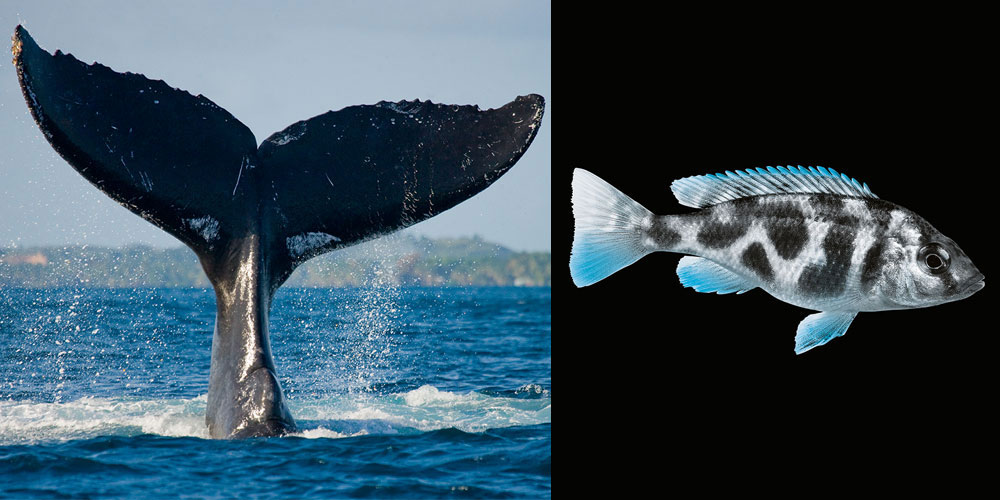 Marine mammals, such as whales and dolphins, have fins and a tail to help them swim and stay upright (just like fish), but these similarities are in appearance only. Marine mammals move with the help of their horizontal tail. Their tail flaps up and down to propel them through the water. Fish move through the water thanks to their vertical tails, which move from side to side.

What is a Swim Bladder?

Ever wonder how fish have enough energy to stay afloat all day? It’s because of their swim bladder. This organ keeps the fish from sinking. Fish have body tissues denser than water, so the swim bladder, which is like a balloon inside their bodies, fills with gas to create buoyancy. This counteracts the fish’s weight. In addition to creating buoyance, the muscles around the swim bladder can contract its size, reducing the volume so the fish displaces less water; the fish is heavier and can now sink. The swim bladder allows fish to control their buoyancy, and because the dorsal position of the swim bladder, the center of mass is below the center of volume. This allows it to perform as a stabilizing agent.

Since most fish make allowances for their weight using their swim bladder, you must find a way for your robotic fish to balance itself. One suggestion is to fill a small plastic bag with screws/nuts and attach it to your robotic fish. You may have to test the amount and position a few times before you’re successful.

We use cookies on our website to give you the most relevant experience by remembering your preferences and repeat visits. By clicking “Accept”, you consent to the use of ALL the cookies.
Do not sell my personal information.
Cookie SettingsAccept
Manage consent

This website uses cookies to improve your experience while you navigate through the website. Out of these, the cookies that are categorized as necessary are stored on your browser as they are essential for the working of basic functionalities of the website. We also use third-party cookies that help us analyze and understand how you use this website. These cookies will be stored in your browser only with your consent. You also have the option to opt-out of these cookies. But opting out of some of these cookies may affect your browsing experience.
Necessary Always Enabled
Necessary cookies are absolutely essential for the website to function properly. These cookies ensure basic functionalities and security features of the website, anonymously.
Functional
Functional cookies help to perform certain functionalities like sharing the content of the website on social media platforms, collect feedbacks, and other third-party features.
Performance
Performance cookies are used to understand and analyze the key performance indexes of the website which helps in delivering a better user experience for the visitors.
Analytics
Analytical cookies are used to understand how visitors interact with the website. These cookies help provide information on metrics the number of visitors, bounce rate, traffic source, etc.
Advertisement
Advertisement cookies are used to provide visitors with relevant ads and marketing campaigns. These cookies track visitors across websites and collect information to provide customized ads.
Others
Other uncategorized cookies are those that are being analyzed and have not been classified into a category as yet.
SAVE & ACCEPT